Growing up, my Mom would grab the bag of flour from the cupboard and just dump some into the stand mixer, add water and a yeast packet, maybe some salt, and get to work. We would have fresh bread with dinner, or kick-ass pizza for dinner, with what seemed like little to no effort. That time with Mom in the kitchen was basically less-rambunctious playground for me. As I have grown older, that same playground has continued to be my creative space.

When I started brewing about 15 years ago it was a natural extension of some of my favorite past times:  cooking food and consuming beer. Brewing lets me still spend time playing in the kitchen but produced five whole gallons of beer! The only problem is waiting that month or so to uncap the goodness. Patience, my friends, is something I have always been short on, which is why, despite my love of all things culinary, baking bread remained off limits to me. 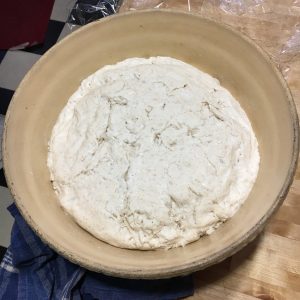 Baking good bread lays atop the zenith of science and art, balancing precise measurements with tactile awareness, and time management with saintly patience. My Mom, raiser of three moronic boys, possesses these qualities in spades. For me, though? The many times I tried my hand at making a loaf of bread or some rolls the results were always lackluster. And why is that? Because I didn’t want to wait, messed up my schedule, or eyeballed what I put into the bowl. It is possible that Raugutiene or Silenus smiled upon me at some point because, generally speaking, I have been able to make decent beer all this time without being too much of a stickler to the rules. So why is bread so hard?

Bread and beer are arguably the cornerstones of modern civilization. Our Mesopotamian forbearers figured out that they didn’t have to wander around so much if they replanted the wheat berries they were harvesting. Moreover, when that wheat got hot and wet, it got stinky and foamy. Our mouth-breathing predecessors had no concept of what fermentation actually was, but they found out that the thicker stuff, when applied to heat, kept their bellies full, while the thinner stuff got them thinking they were good at shooting pool. Both products kept well and forced them to invent math, and all so we can shoot sports cars into outer space. I have always been terrible at math, and I have never event owned a sports car, but I can make beer, so I should be able to channel my inner-simian and make some bread, too. 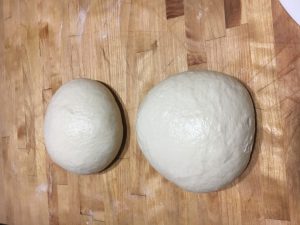 Desiring to recreate those fond memories of my youth in my own home, I had to sit myself down for an honest me-on-me intervention. “Listen, pal,” I said, “it’s time to get your act together, plan your days better, and definitely stop talking to yourself.” Bread would serve as my living self-help guide to time management and “adulting”.

I had known for years that I can wait for wort to ferment. Heck, I can schedule a six hour brew day! It was time to finally lay it out there and make some bread. It started simple, with some basic loaves using basic ingredients, but this time I used a scale! Yes, that same scale I use to weigh out my hops and grains is now measuring flour and water by the gram. I also ditched the KitchenAid. Well, not exactly. I still own it and use it, but for the sake of good bread, I had to learn to knead. The hands-on approach inadvertently taught me what dough is really supposed to feel like, à la Daniel LaRusso painting the fence. Don’t get me wrong, I fell off the post many a times, but I eventually started crane-kicking out some kick-ass loaves of bread. 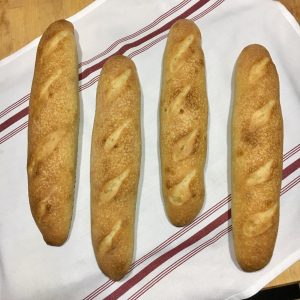 Fast forward to 2019: I have a lovely sourdough starter that I cultivated from some fresh-pressed Syrah wine grapes that I crushed with my Dad in 2016, which I use almost exclusively for raising up all manners of doughs, from pizza crusts to baguette to pretzel logs. The same science that I have barely understood for years, but have known to work, has been harnessed. The experience to focus my attention, make plans, and then change plans based on what’s happening, is, well…better. But like all things in life, there is constant room for improvement. Now, to bastardize the words of the legendary Charlie Papazian, let’s cut the shuck and jive and make some bread.

Okay, so that’s when the C-man usually gives you a recipe for a prickly pear lagered porter or some such. That’s not me. And the world of bread making is really big, so here’s some general stuff that will hopefully get you started.

View all posts by Andy O! →

Get Email Alerts For New Posts